O3 Mining's President and Chief Executive Officer, Mr. Jose Vizquerra commented, "We are very excited with the initial results from our exploration work at the Hygrade Fold area in the northwestern portion of Marban Engineering, as part of our brownfield exploration program. This underexplored, large land package offers significant exploration potential upside, with several historic showings, and promise for a new discovery. With our recent positive pre-feasibility study results (C$463M NPV (5%), unlevered IRR of 23.2% and over 160Koz gold per year), showing a robust standalone project, we look forward to the feasibility-level study ahead, and exploration work to grow the inferred mineral resource."

O3 Mining initiated a brownfield exploration program from late June to early September, drilling 10,500 metres within the Hygrade Fold area. This area encompasses two former mines, the Malartic Hygrade mine and the Orion #8 mine, which produced 40,000 oz Au over their mine life (historical production summarized in Table 2). The Hygrade Fold area also includes the Malartic H deposit, which is composed of several stacked zones hosted in basalt and felsic dikes, which has never been mined.

The compilation of historical drilling in this area revealed a previously underexplored sector with high-grade historic intercepts within wide basaltic units similar to the basalt hosting the Marban deposit. Assay results for 6,500 samples are still pending within the Hygrade Fold area. The summer drilling campaign confirmed the presence of a mineralized structure within the basaltic units and the Corporation plans to follow up drilling for the 2023 winter campaign on best intercepts as results are being received. The winter campaign will also aim to better define and expand known mineralization at Malartic H, Malartic Hygrade and Orion #8. 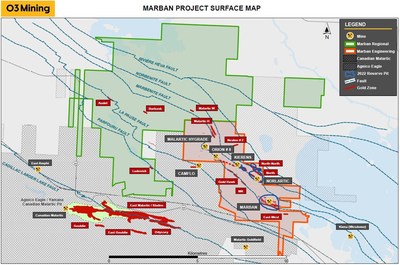 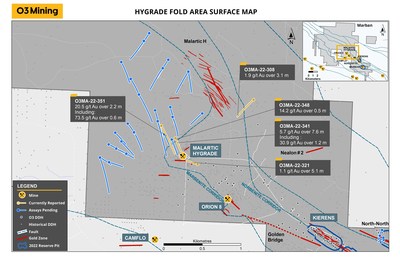 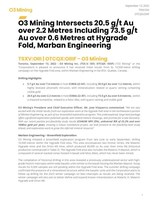