/THIS NEWS RELEASE IS NOT FOR DISTRIBUTION TO U.S. NEWSWIRE SERVICES FOR DISSEMINATION IN THE UNITED STATES/

TORONTO, Sept. 2, 2022 /CNW/ - O3 Mining Inc. (TSXV: OIII) (OTCQX: OIIIF) ("O3 Mining" or the "Corporation") is pleased to announce that its common shares (the "Common Shares") are now eligible for electronic clearing and settlement through the Depository Trust Company ("DTC"). 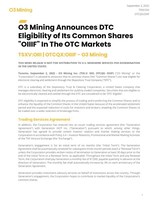 DTC is a subsidiary of the Depository Trust & Clearing Corporation, a United States company that manages electronic clearing and settlement for publicly traded companies. Securities that are eligible to be electronically cleared and settled through the DTC are considered to be "DTC Eligible".

In addition, the Corporation has entered into an issuer trading services agreement (the "Generation Agreement") with Generation IACP Inc. ("Generation") pursuant to which, among other things, Generation has agreed to provide certain investor relation and market making services to the Corporation in accordance with Policy 3.4 – Investor Relations, Promotional and Market-Making Activities of the TSX Venture Exchange (the "Exchange").

Generation's engagement is for an initial term of six months (the "Initial Term"). The Generation Agreement shall be automatically renewed for subsequent three-month periods (each a "Renewal Term") unless the Corporation provides written notice of termination to Generation at least 30 days prior to the end of the Initial Term or a Renewal Term, as applicable. Throughout the Initial Term and any Renewal Term, the Corporation shall pay Generation a monthly fee of $7,500, payable quarterly in advance at the direction of Generation. The monthly fee shall automatically increase by 3% on each anniversary of the Generation Agreement.

Generation provides investment advisory services on behalf of institutions across the country. Through Generation's engagement, the Corporation hopes to contribute to market liquidity of the Corporation's common shares.